The store will not work correctly in the case when cookies are disabled.
Please sign in with your email address or Create an Account.
Brightwell Aquatics PhytoGold-M - Golden Phytoplankton (medium) 8-20 micron by Brightwell Aquatics]
13.4 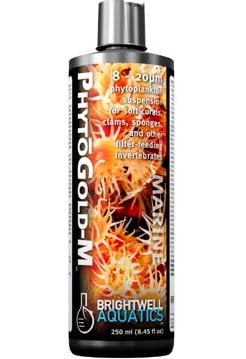 * Provides phytoplankton ranging in size from 8 - 20m.
* Ideally-sized for many soft corals, clams, sponges, tunicates, tube worms, and larval invertebrates.
* Formulated to provide over 50-million phytoplankton cells per ml.
* Does not require refrigeration.
* Supplemented with a proprietary amino acid to aid in coloration of invertebrates.
* Formulated by a marine scientist.

* Provides phytoplankton ranging in size from 8 - 20m.
* Ideally-sized for many soft corals, clams, sponges, tunicates, tube worms, and larval invertebrates.
* Formulated to provide over 50-million phytoplankton cells per ml.
* Does not require refrigeration.
* Supplemented with a proprietary amino acid to aid in coloration of invertebrates.
* Formulated by a marine scientist.

Brightwell Aquatics PHYTGOLD-M is a concentrated suspension of Thalassiosira sp., a unicellular marine algae ranging in size from 5 - 20m and having a diverse nutritional profile; it is rich in the omega-3 fatty acids ARA and DHA, as well as in several important amino acids. Thalassiosira falls within the size class of plankton known as nanoplankton (2.0 - 20.0m), which is sometimes considered microplankton. It is the proper size for feeding many species of soft corals (particularly those with short tentacles), as well as clams and other bivalves, sponges, tunicates (sea squirts), plumed worms (Christmas tree worms, feather dusters, etc.), bryozoans, larval invertebrates such as those of many crustaceans and bivalves, and juvenile fishes.Though Thalassiosira provides a number of amino acids, one that is not naturally present has been added to PHYTGOLD-M; this proprietary amino acid has been shown in studies to increase coloration of corals and other marine invertebrates. Additionally, a small percentage of vitamin-C is present to increase the benefits of PHYTGOLD-M, particularly to corals and their allies that have recently undergone fragmenting or propagation.
PHYTGOLD-M may be used in conjunction with other planktonic suspensions to provide a complete range of sizes to filter-feeding and planktivorous organisms.

Caution:Keep out of reach of children. Not for human consumption.